This is one of the best periods to visit this ancient town if swimming and bathing is not the primary reason for your trip.

The weather is still rather cool but it could happen that in these months, specially in April you can be the first to enjoy the foretaste of summer.

Throughout the year, including these months, you can always find the braver swimmers playing the popular picigin game on legendary sandy Bacvice beach.

Even if it will be not your case, it’s the only period when Split is relatively empty of visitors and the weather is good enough to perfectly enjoy your vacation.

This spring period is also a perfect for outdoor activities on your own, as organized activity tours will not start before May or June.

Daily temperatures go up considerably particularly in April. This is the great time for hopping the nearby islands and small towns (Bol, Stari Grad, Hvar, Jelsa).

You might find them rather lethargic in this period or difficulty in finding appropriate ferry timetable  schedule as Jadrolinja is still on winter ferry timetable.

Hotels in Split in March and April

The difference between these spring months are more evident in number of sunshine hours, in March 186.8  (more than 7 days) while April is sunnier with 217.2 hours (more than 9 days).

Older generation’s beliefs associate the March with three ‘Dark bura wind days’. They go so far to predict three dates in March in which the storm will occur. Usually 7th, 17 and 27th are referred, and in some places on Central Dalmatian islands dates 7th, 14tn and 27th.

March is known as a month with the frequent conflict between two seasons, winter and spring. It is also on of the windiest months of the Adriatic sea.

I must say that both are right, at least in number of “Dark bura storms’. There are two types of Bura wind as explained on my coast winds page!

What To Do And See in March And April

Both months, March and April are traditionally interconnected with sea, nautical activities, and exhibitions or sport competitions. 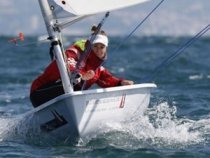 Split Olympic Sailing Week is held traditionally each year in the mid March, that attracts a large number of competitors from many countries of the world, making it one of the most significant sailing regattas in this period of year.

This year 2015, the eleventh edition of Split Olympic Sailing Week will be organized in May. This year the first  start will be given on 2nd of May at 11.00 AM while last racing day is 5th of May.

It is organized by Yacht Club Labud Split. Check their website!

This year is seventeenth Split Boat Show but for the first time will be held on the promenade of the West Bank side, under the slopes of Marjan Hill.

It will be placed next to the ACI Marina Split that provides protection from the sea and southerly winds.

This largest regional event of its kind (from 5 to 19.April.2015), the Croatia Boat Show is a outstanding arena representing over 300 yacht builders, engine and equipment producers, as well as corresponding goods and services for true lovers of the sea and sailing.

During the show you’ll be able to enjoy the spectacular boats, but also to take part on a presentation cruise and even to participate in judging the winners in various categories.

Only a few days after Split Croatian Boat Show is over, another boat annual exposition will be held in Split’s district Podstrana from April 30th until May 3rd, at exclusive Hotel Meridien Lav.

Croatia has a rich and proud ship building tradition and this exhibition is the right place to get to know the diversity of quality boat, where the producers are only Croatians.

This national nautical expo Croatian Boat Building Days has become the central meeting place for all important aspects in the production and sales of Croatian boats from semi-submarines to luxury charter yachts.

Running  Along The Most Beautiful Waterfront

Split has always been the most sporting town in Croatia. In March and April the city of Split is the protagonist of many sport events.

One of events planned for April 26, 2015 is Split Half Marathon. This marathon has a long tradition but this year it will cover the whole city area including the most beautiful parts as Marjan Hill, Poljud Stadium, with a start and finish on Riva promenade.

If you are a marathon fan you have a good reason to travel to Split as this 5 km race has become internationally accepted and promoted by many famous Split’s athletes like Goran Ivanisevic, Blanka Vlasic, Duje Draganja, Dino Radja, Robert Jarni and many others.

If you like this travel guide about Split in March and April For a Perfect Spring Break and found it useful, consider supporting the author with a coffee or share it with your friends:

Cruising for Seniors from Split