Find out all you need to know when traveling to Split airport (SPU). This is your  guide to arriving, connecting or transfers to/from Split town.

Getting to Split by air, this airport will be your entrance gate to Croatia and Dalmatian islands.

After Split was declared the champion of tourism in Croatia in 2012, this airport has become the most important along the Croatian coast.

Last year this airport handled more passengers within 24 hours than any other airport in Croatia, reaching millionth passenger, beating Dubrovnik airport in the south and Zadar airport on the north of Dalmatia.

Your vacation will start the moment your airplane lands on sometimes called Resnik or Kastela airport as it is only 2 km from Kastela riviera, 6 km from Trogir and 24 km to Split center.

The airport is mostly used during the summer months when  in peak season  reaches to 120 landings particularly on  Saturdays.

It is a rather long the list of companies flying to Resnik airport from Croatian national company Croatia Airline, German Wings, Easyjet, Thomas Cook Airlines, Norwegian and many other charter companies.

During the winter period the only companies flying to the airport is Croatia Airlines and German Wings.

Visiting airport official web site you can find all detailed information about airport services. On the web you can find also web check-in for all departures from the airport and the list of all airlines as well minimum and maximum time to register your flight.

This will save you time and all you need is ether, name and surname, electronic card number, frequent flier card, or reservation code.

When you disembark your thoughts will be how to find the means of transfer to Split city or in nearby holiday destinations like Trogir, Makarska, Brela, Tucepi, Baska Voda or Dubrovnik.

Distance from the airport to main towns

It’s important to point out that official buses leave approximately 90 minutes before scheduled flight time but in high season (July ans August) I seriously recommend to show up 2 hours before scheduled departure time.(from my personal experience)

To get to/from Split airport to Split center or Split ferry port you can use several transfers options:

If you like this travel guide about Split Airport Survival Guide and found it useful, consider supporting the author with a coffee or share it with your friends: 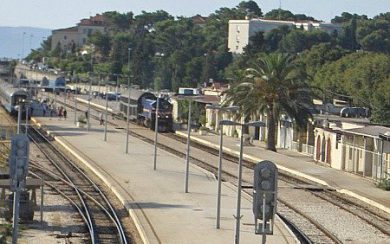