There are literally thousands and thousands of beaches in Croatia. Most of them are rocky or pebble, with only a few sandy ones. However, regardless of their type you can find some of the nicest beaches in the world in Croatia for whatever activity you’re looking for.

Some beaches are family-friendly, others are for partying, while some feature untainted nature perfect for sunbathing and swimming. The list below has my five most favorite and must see beaches in Croatia’s beautiful Mediterranean environment, and whatever your taste is I’m certain you’ll find the perfect place to visit.

Rab has a total of 22 sandy beaches (among several rocky ones as well), and the most known one among them is Rajska Plaza (pronounced rayska plazha, literally means paradise beach). This beach is perfect for children, inexperienced swimmers or the elderly since it’s incredibly shallow: even if you walk more than 500 meters you’ll still be able to firmly stand on your feet.

In the beach vicinity there are plenty of hotels and private apartments, and if you need a break from the sometimes overcrowded beach there’s a sports centre, mini golf, and more than enough restaurants and bars. The beach also has lifeguards to make sure you’re as safe as you can be, and has been awarded a blue flag.

On the southern coast of Brac island is Bol, an old harbor town with a 15th century palace, a fort, a monastery and a couple of renaissance citadels. Most known however is the Zlatni Rat beach, which is one of the most beautiful and well known beaches in the Adriatic.

Definitely a uniquely shaped beach, even more special by the fact that it changes shape depending on the wind. This distinctive beach attracts tourists not only because of the shape, but also because it’s one of the nicest places to swim and relax, with plenty of additional activities like windsurfing, scuba diving or other water sports.

The beach also has plenty of restaurants, cafe bars, as well as parachute rides, jet skis and more. Don’t miss our Top Brac Island Beaches article as well for more info and suggestions!

Less than a kilometer away from the Old City of Dubrovnik lies a small island called Lokrum, a natural resort under protection by the Croatian Academy of Art and Science. You can get there by taking a taxi boat from Dubrovnik’s Old Harbor every 30 minutes (or 1 hour in winter). Lokrum is a great place for a one-day trip if you’re in the vicinity. It’s uninhabited, and there aren’t too many people there. Tourists come on Lokrum to enjoy calm swimming without the crowds and untainted nature.

On the island itself, there’s a restaurant and a cafe bar located in an old Benedictine monastery (you might have already seen it if you’re a fan of Game of Thrones TV series, as it was one of the filming locations). On the highest peak on the island there’s an old fort from which you can get a great view on Dubrovnik. Other than that, you can visit a botanical garden, and a small lake which is perfect for children to swim in. No houses, hotels, souvenir shops or anything like that: if you visit Lokrum do it for its nature, beauty and a relaxing day in silence.

Pag is the fifth largest island in Croatia full of bays, coves and beaches. On the northeast part of the island is Novalja, and just a few minutes away is Zrce beach (pronounced zrche), one of the more popular ones among young people looking to party all day and night.

Unlike some other beaches listed here, Zrce is not a place where you go for a relaxing swim or to enjoy the nature. It’s the most popular destination for young people looking to have a great time, so if you’re into that you surely won’t be disappointed.

Krk is Croatia’s biggest island, and a very popular destination for families. It’s connected with the mainland with a bridge, making it even easier to visit. Baška (bashka) is a small town on the southern part of the island, immensely popular among tourists since it has facilities and activities for everyone. There’s over 20 sand or pebble beaches in the vicinity, but the most known and likely the best one is Vela Plaza (pronounced plazha).

Vela Plaza is a sandy beach very suitable for children or inexperienced swimmers, which is almost two kilometers in length (1 mile). In the vicinity there are plenty of restaurants and bars, as well as hotels and private accommodation.

Of course these five beaches only touch the surface of what Croatia has to offer, they are just our most favorite ones based on the immense popularity by tourists. In the heat of the season they may even be overcrowded for your taste, but perhaps you can get past that and enjoy everything that they have to offer. 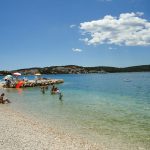 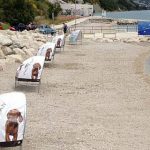 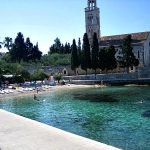 The Most Beautiful Hvar Island Beaches
Share and help:

If you like this travel guide about Five Must See Beaches in Croatia and found it useful, consider supporting the author with a coffee or share it with your friends: 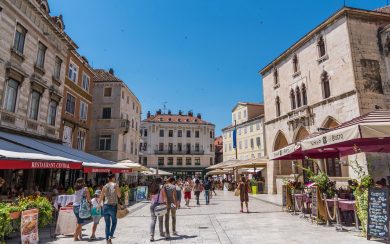 How to Learn About Split on TripAdvisor