Croatia’s gay cruises has become interesting in these past years but Croatia is still far away from being a gay friendly country.

For more information I suggest specific websites where you can find information about tourist info, gay guide, accommodation, gay hotels and apartments in Zagreb, Rovinj, Dubrovnik, Hvar, Split and Trogir.

I personally suggest you to chose one of two cruises starting from Split and Dubrovnik to discover all beauties of Dalmatian coast and islands, along with like-minded enthusiasts on a specialized cruise with only gay passengers and friendly crew.

Paradise Cruise of Dalmatia from Split

The Croatian coast is amongst the most beautiful in Europe, so if you would like to cruise along the divine Adriatic coast together with your gay partner, this category might be the perfect one for you.

If you are single and looking to meet your soul mate, who knows this just might be the right place.

If you’re interested in this gay cruise from Split along the Adriatic be sure to book your trip here ahead of time!

There is not better place then Dubrovnik to start your unique cruise adventure. The special charm of this old city will be your unforgettable start.

Start you first day to explore the city walls and plan what to do on your last night of the cruise when you will return to this wonderful city.

You can book your cruise from Dubrovnik on this link.

Tips for Gay and Lesbian Travelers

In Roman Catholic Croatia, gays are tolerated but not celebrated. The country legalized homosexuality in 1977, but overt homosexual behavior is frowned upon in general and may be met with hostility in rural areas. Read more this Frommers article! 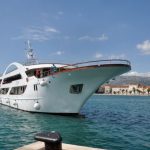 Cruising for Seniors from Split

If you like this travel guide about Gay Cruises in Croatia and found it useful, consider supporting the author with a coffee or share it with your friends:

How To Get To Plitvice Lakes From Split City?

Where To Eat In Split