Sinjska Alka is a traditional tournament being held every first weekend of August in the small town of Sinj Croatia since 1715, honoring the victory over Ottoman Turkish invaders. It’s one of the most impressive Split day tours held every year, so don’t miss it if you’re nearby.

The name ALKA refers to a metallic object made of two concentric rings connected with three bars. The object is hung on a rope 3.32 meters above the race track. The aim of every alkar (knight) is to hit the center of the ring with his spear riding the horse in full gallop.

Depending of which part of the ring they hit, they gain from 1 to 3 points. The whole competition is made of three rounds.

The competition is conducted by Vojvoda (Duke) representing the commander of knights usually the most notable men from Sinjska Krajina (Sinj town county).

Only men born in the city of Sinj and surrounding villages can take part in this tournament, considered the highest privilege to each participant.

This tournament is a picturesque reminder of our history events and a richly costumed parade, which has become a public manifestation held annually. A great experience for every visitor.

Another notable reason to visit Sinj is a famous procession of Lady of Sinj locally called Sinjska Gospa, held each year on August 15th.

Sinjska Gospa is evidently a miraculous image of the Virgin Mary, displayed in the local church. Locals believe she helped local population defend against the Turkish invaders back in 1715. This image draws pilgrims from all over Croatia to this town each year.

How to get to Sinj?

The best way is to take a bus connection from Split bus station. It runs almost every 30 minutes from Split. Bus station Split is located in the very center of the city, right next to city harbor and railway station.

Sadly over the last few years Alka has become a must-visit for Croatian politicians, meaning it certainly lost most of its appeal to many Croats who would normally enjoy this otherwise fun manifestation.

Sinj Alka still attracts a ton of visitors each and every year, so if you’re visiting be prepared to fight for a good spot

If you like this travel guide about Alka – Knights Tournament in Sinj and found it useful, consider supporting the author with a coffee or share it with your friends:

Edita works in tourism industry and lives near Dubrovnik, and is a part-time writer for Splitgg. More about our authors »

Greek Financial Crisis and how it affects Croatia 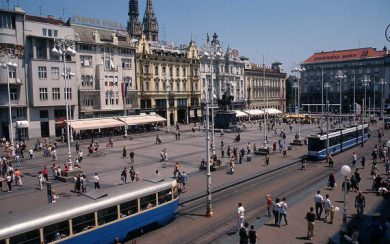 History and Meaning of Hajduk Split